Abbots Jan Chozen Bays, Roshi and Hogen Bays, Roshi are the spiritual directors and head teachers of the monastery with teaching assistance from other ZCO teachers, lay and ordained 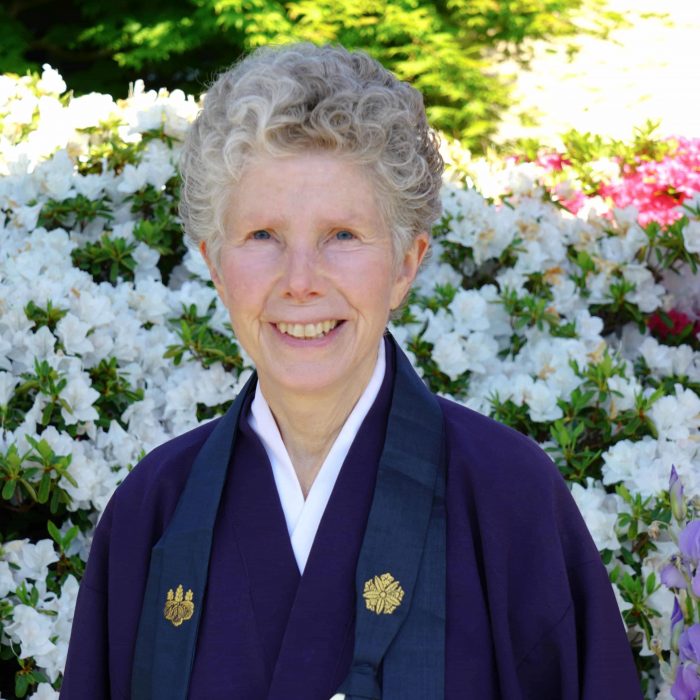 Since 1985 Chozen Roshi has been the teacher for Zen Community of Oregon. In 2002 she helped to found Great Vow Zen Monastery and is co-abbot. In 2011 she also helped found Heart of Wisdom Zen Temple in Portland, Oregon. She has written books on mindfulness and mindful eating, and written articles published in Buddhadharma and Shambhala Sun.

Jan Chozen Bays, Roshi has studied and practiced Zen Buddhism since 1973. She received Jukai (lay precepts) in 1975 and Tokudo, Priest’s Ordination, in 1979 from Taizan Maezumi, Roshi. From 1978 to 1983 she lived at Zen Center of Los Angeles, studying with Maezumi, Roshi and directing the Zen Center’s non-profit Medical Clinic. She finished formal koan study in 1983 and she was given Dharma transmission (authorization to teach) that same year. Following the death of Maezumi, Roshi in 1995 she continued her training with Shodo Harada, Roshi, a Rinzai Zen teacher and the abbot of Sogen-ji monastery in Japan.

Since 1985 Chozen, Roshi has been the teacher for Zen Community of Oregon. In 2002 she helped to found Great Vow Zen Monastery and is the co-abbot. In 2011 she also helped found Heart of Wisdom Zen Temple in Portland, Oregon.

She has published many articles about Zen in the periodicals Tricycle and Buddhadharma. Her first book, Jizo Bodhisattva, Modern Healing and Traditional Buddhist Practice (Tuttle, 2002), has been re-issued in paperback as Jizo Bodhisattva, Guardian of Children, Women and Other Voyagers by Shambhala. She is the author of How to Train a Wild Elephant: And Other Adventures in Mindfulness (Shambhala, 2011), and Mindful Eating: A Guide to Rediscovering a Healthy and Joyful Relationship with Food (Shambala 2011). 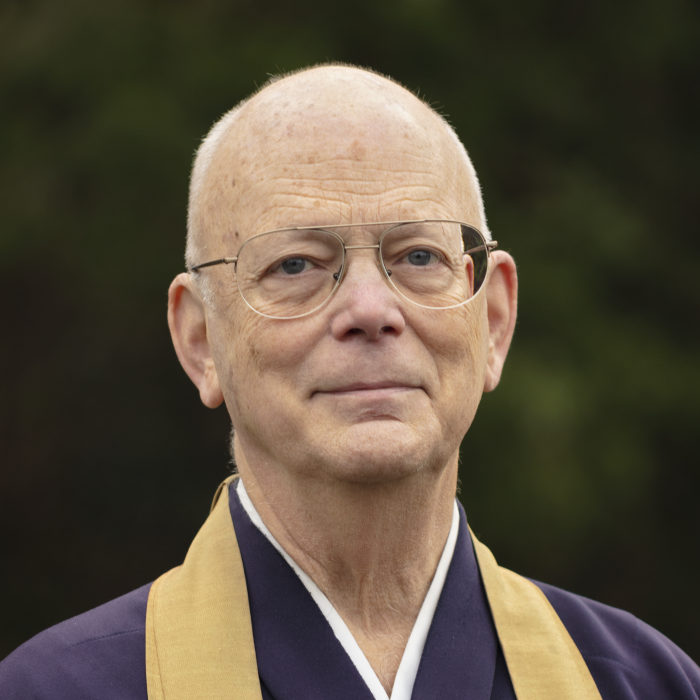 Hogen Bays, Roshi began practicing Zen in 1968 with Philip Kapleau, Roshi doing residential training at Zen Center of Rochester and eventually at Zen Center of Los Angeles with Taizan Maezumi Roshi. He continued his Zen studies with Shodo Harada Roshi in Japan and on Whidbey Island from 1990 – 2015.

He’s a psychologist and Naturopathic Doctor (ND). He is co-abbot of Great Vow Zen Monastery.

Hogen Bays, Roshi began practicing in 1968 with Philip Kapleau, Roshi and was part of the residential staff at Zen Center of Rochester in Rochester, New York until 1975.

He lived and trained at Zen Center of Los Angeles under the direction of Taizan Maezumi, Roshi from 1980-1984. In 1990 he took priest’s ordination with Maezumi, Roshi. After advice and consultation with Harada, Roshi and other Zen teachers, in 2000 he received Dharma Transmission from Chozen, Roshi.

Since 1990 Hogen has continued his Zen studies with Rinzai Zen teacher Shodo Harada, Roshi, abbot of Sogen-ji monastery in Japan and One Drop Zendo in Tahoma, Washington.

He has been a leader of Zen Community of Oregon since 1985 and worked full-time for the sangha since 1997. He is co-abbot of Great Vow Zen Monastery.

Hogen holds a Naturopathic Doctor (ND) and Master’s Degree (MS) in Psychology. He worked for the Oregon Department of Corrections for 15 years.

Hogen is a lifelong and devoted student of the Dharma and continues to broaden his practice by studying with teachers outside the Zen tradition. 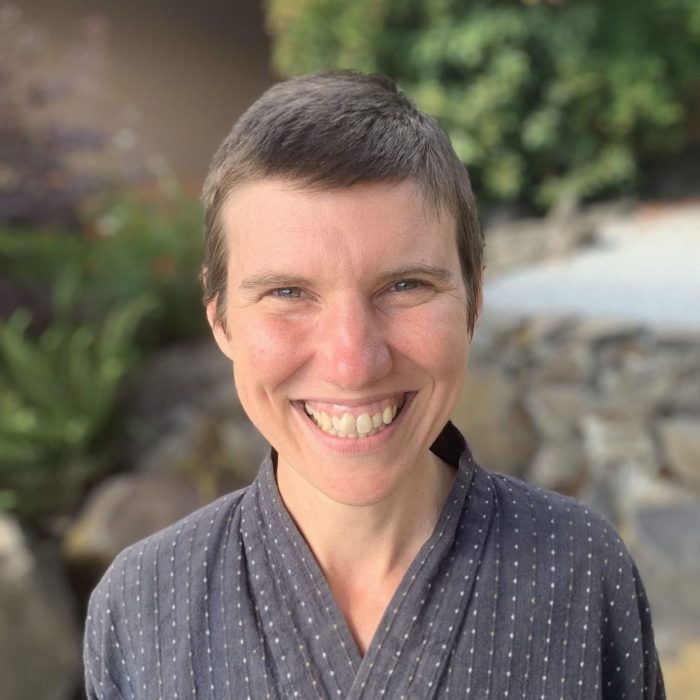 Amy Kisei is an authorized Zen teacher, zen priest, spiritual counselor and mindfulness instructor. Kisei has 12 years of monastic training and teaching experience from Great Vow Zen Monastery, and holds a BS in Earth Science and Gender Studies. She is passionate about bringing the practices of meditation/mindfulness into environmental justice & climate grief work. Learn more about Amy Kisei by visiting her website www.amykisei.org 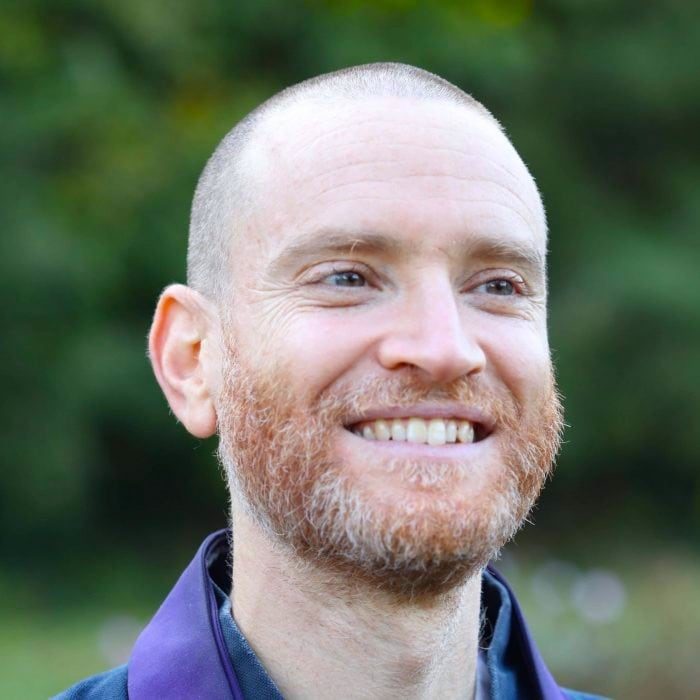 Jogen Salzberg, Sensei has been practicing Zen since 1997, entered monastic training at Great Vow in 2003 and received Dharma Transmission from Chozen Bays, Roshi and Hogen Bays, Roshi in 2017. His teaching draws on the teachings and practices of Zen, with inspiration from the Dzogchen tradition, as well as Depth psychology, Voice Dialogue parts work and more. He is a parts work facilitator and spiritual counselor. Jogen lives in Asheville, NC. 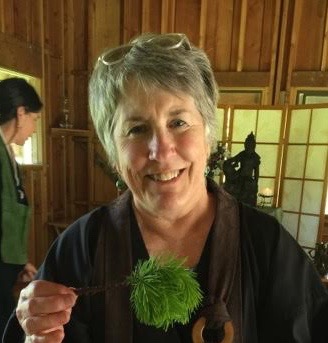 Abby Mushin Terris has been practicing Zen since 1977. In 1992 she began Corvallis Zen Circle, a small sitting group that now has evolved into Sangha Jewel Temple where she is the guiding teacher. Mushin received Lay Transmission from Chozen Roshi in 2013 and is one of the sesshin leaders in ZCO. She also works as a psychotherapist and is the mother of two grown daughters. 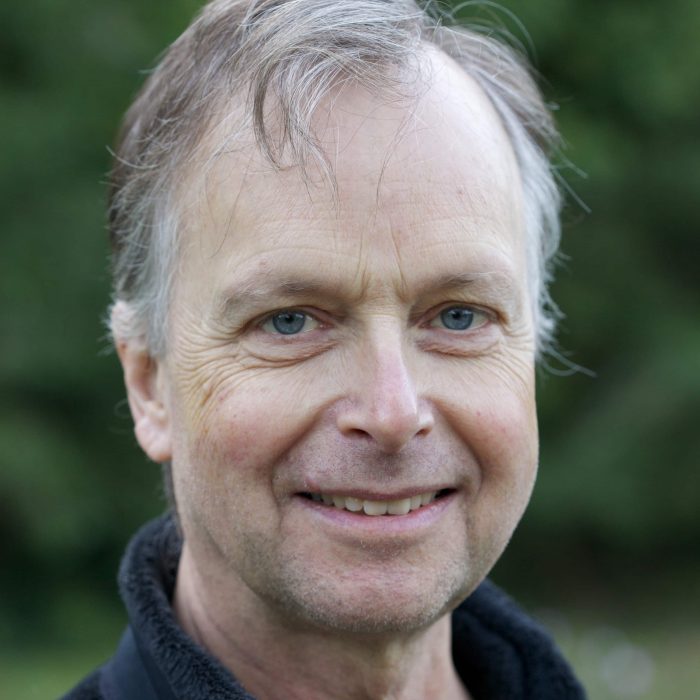 Larry Fuho Trussell has been practicing Zen since 1976, and received Lay Transmission from Chozen and Hogen Roshi in 2015. Fuho is the lead teacher on Sunday mornings at Heart of Wisdom. He is one of the sesshin leaders in ZCO. He works as a research scientist and is married with one grown son. 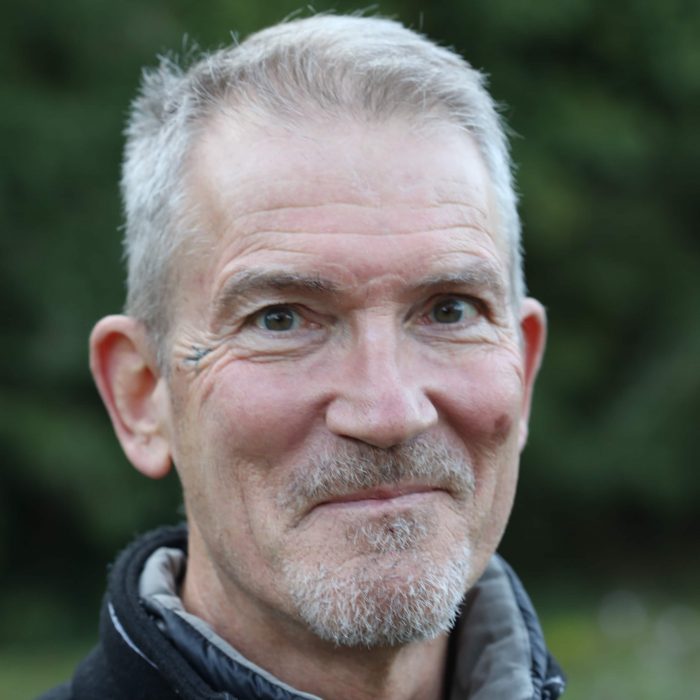 Kim Hoben Hansen has been practicing Zen since 1995 and is the guiding teacher of the North Shore Zendo in Vancouver, Canada. Hoben received Lay Transmission from Chozen and Hogen Roshi in 2015. He is one of the sesshin leaders in ZCO. He practices law as a tax litigator and is married with three grown daughters. 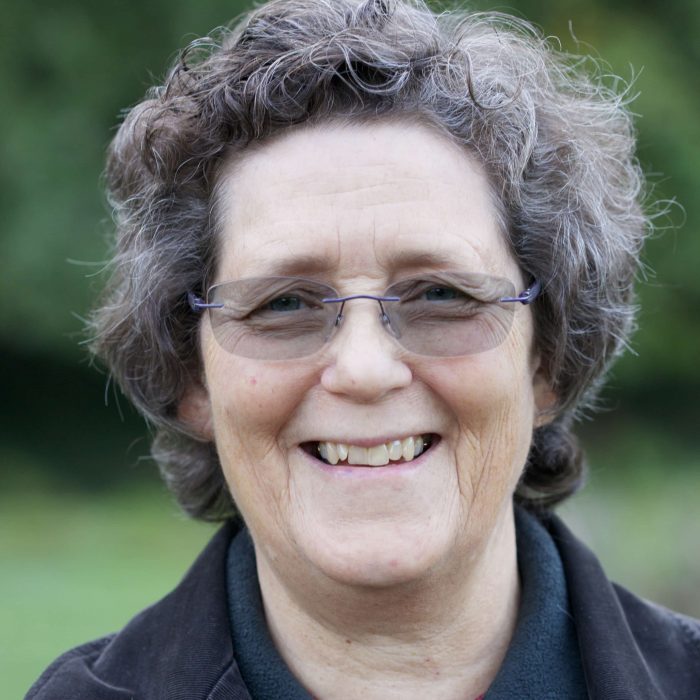 Nancy Kodo Conover has been practicing Zen since 2000 and received Lay Transmission from Chozen and Hogen Roshi in 2015 and ordained a temple priest in 2021. Kodo retired from a career as a vocational rehabilitation counselor to help establish Heart of Wisdom Zen Temple and is the Temple Manager since 2010. She leads Tuesday night meditation and discussion at Heart of Wisdom, as well as our Work-a-Day Sesshin. She is married and has lived in the Pacific Northwest her whole adult life. 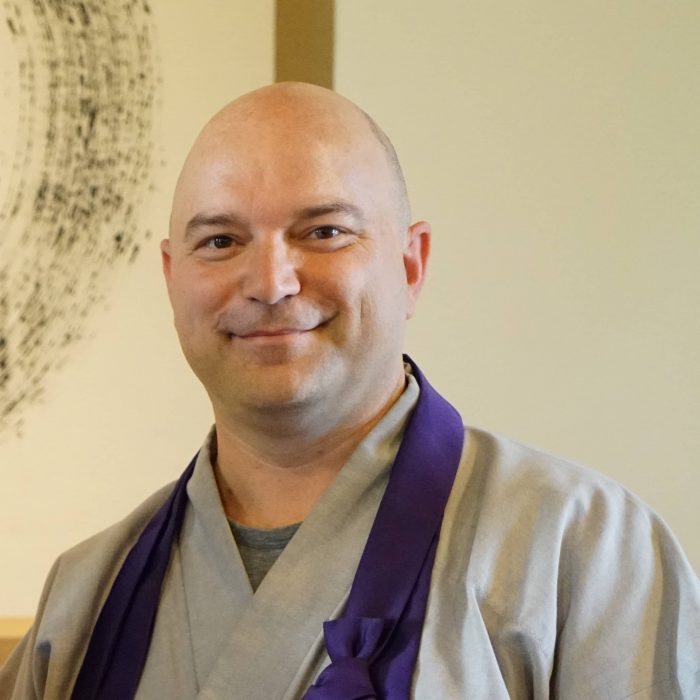 Patrick Bansho Green has practiced with the Zen Community of Oregon since 2004 and received Lay Transmission from Chozen Bays and Hogen Bays in 2019. He was ordained a temple priest in 2021. As board president, he led the effort to found Heart of Wisdom Zen Temple, a lay practice center in Portland, Oregon (2010). Prior to becoming the current full time Administrator for ZCO, Bansho worked for twenty years in the labor movement leading social and economic justice political and legislative campaigns. 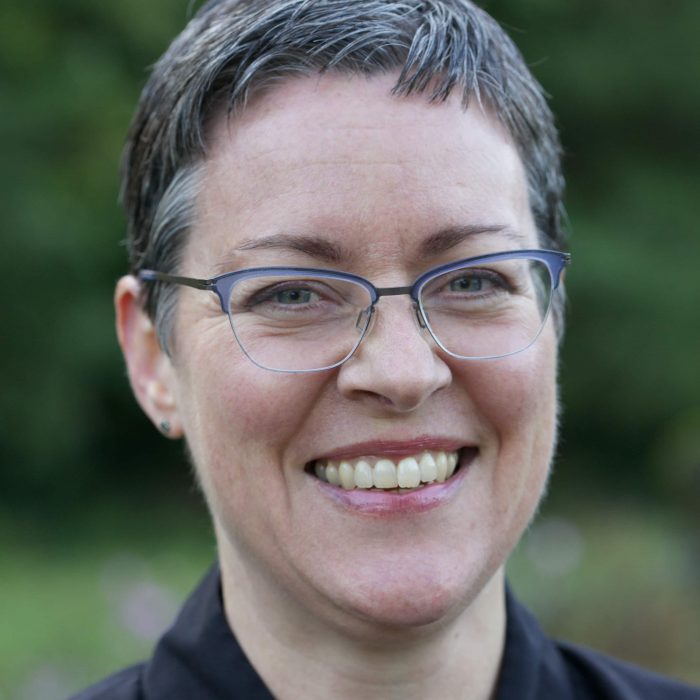 Laura Jomon Martin has been practicing Zen since 2004 and received Lay Transmission from Chozen and Hogen Roshi in 2019. Her career has been in social work since 1993, primarily in community mental health, and she is currently an LCSW in private practice, and a teacher of Mindfulness-Based Stress Reduction, certified through University of Massachusetts Medical School. 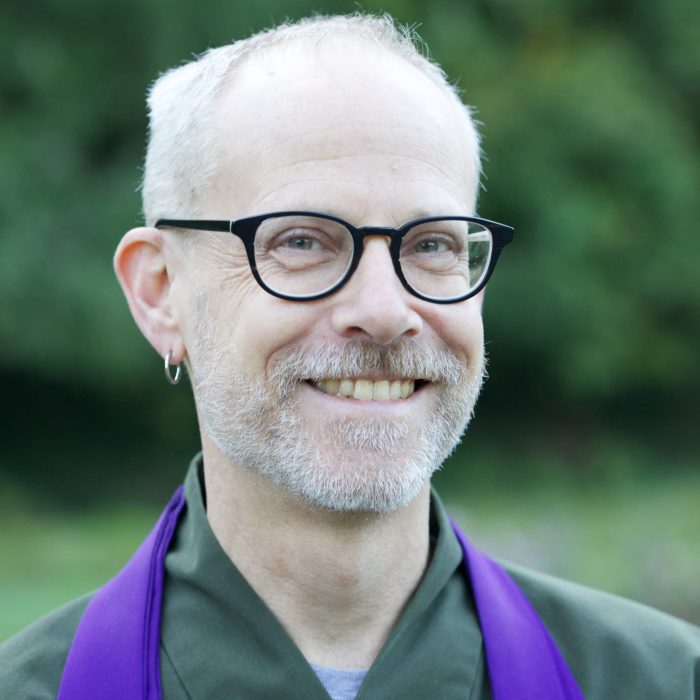 Ed Gensho Welsh began practicing Zen in 2002 and was made a Dharma Holder in 2016. He served on the Zen Community of Oregon board for ten years. He works in IT and is a married father with three grown children. 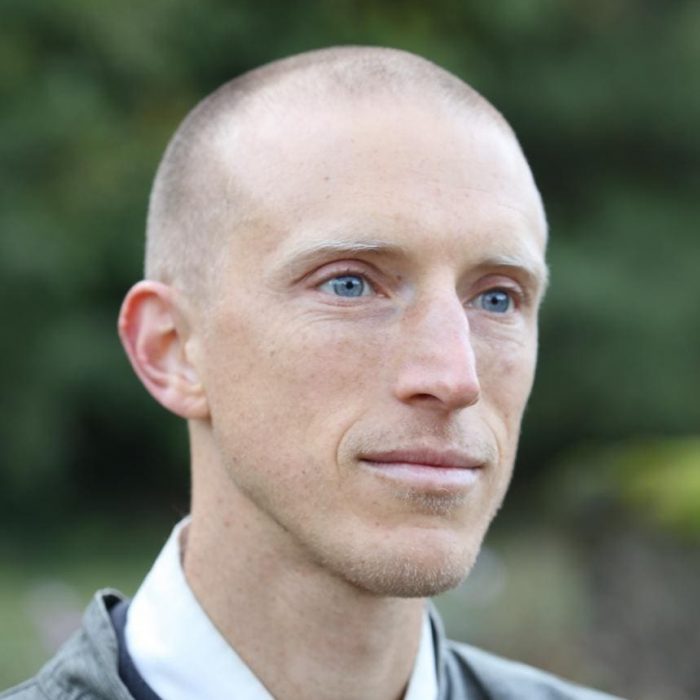 Danney Soten Lynch is a Dharma Holder and ordained Zen priest. He was a monastic resident at Great Vow from 2010-2020 completing his novice training in 2019. Soten has been playing and enjoying music all of his life. He served as the Music Director at Great Vow, breathing new life into the liturgy, and led a monastery choir and the Great Vow marimba band. He is an avid long-distance runner and outdoor enthusiast, who developed our wilderness sesshin. Currently he and Shinei are on a walking pilgrimage from the US to South America. 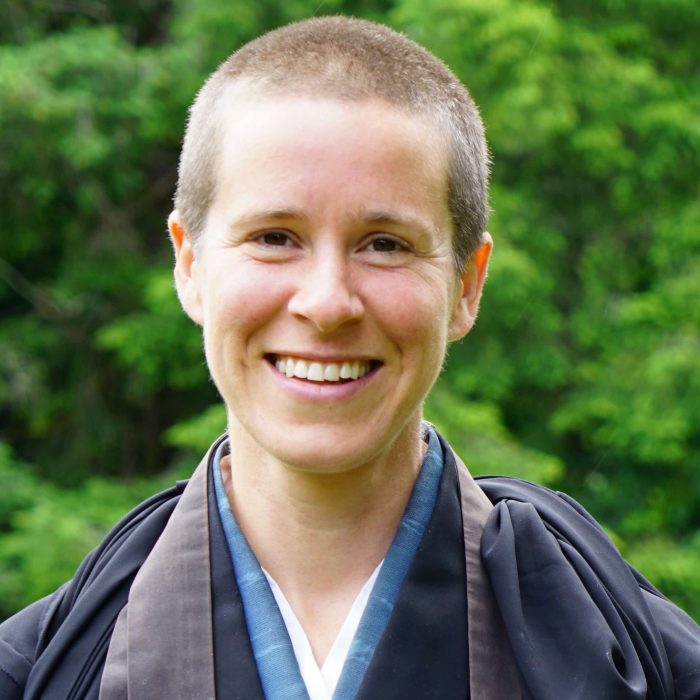 Sara Shinei Monial is a Zen priest who completed her novice training at Great Vow in 2020. She has been practicing meditation intensively since 2007, and has practiced closely with various teachers including Jan Chozen Bays, Roshi, Hogen Bays, Roshi, and Satya Vayu. Shinei has a BA in Education, but left the field years ago to pursue full-time spiritual practice. She is one of the founders of Touching Earth Sangha in Portland, whose intention is simple living in harmony with the natural world. Shinei also teaches yoga and practices long distance running. Currently, she and Soten are on a walking pilgrimage from the US to South America. 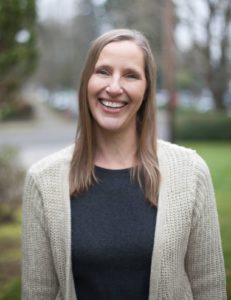 Darah Shonin Ashton has been practicing Zen since 2009 and was made a Dharma Holder in 2019.  She served on the ZCO Board of Directors for 6 years and is the current Treasurer.  She also works as a Chiropractor and is the mother of a grown son and daughter. 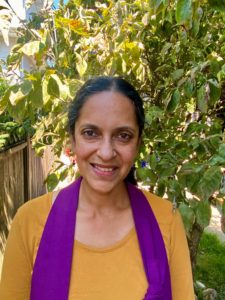 Anusha Enryu Fernando was born in Sri Lanka to a Theravadin Buddhist family. Her grandparents founded the Vipassana Meditation Centre located in Colombo, Sri Lanka in 1957. She began practicing Zen Meditation with Hogen and Chozen Roshi in 2007, and became a dharma holder in 2021. She holds a BA in Religious Studies, specializing in Buddhism and Hinduism from McGill University, and a Masters of Arts in Asian Studies from the University of British Columbia, specializing in Sanskrit. In her dissertation, she translated a Sanskrit poem of the life story of the Buddha, called the Padyacudamani. Enryu has been a teacher and performer of Bharata Natyam, a form of Indian Classical Dance, for the past thirty years and is the founder and Artistic Director of Shakti Dance Society. She has also been the book purchaser at Banyen Books and Sound, Vancouver’s iconic spiritual and metaphysical bookstore, for the past twenty-eight years. She is the mother of an adult daughter and lives with her husband, parents, and multiple furry friends in Vancouver, Canada.